Save the date for the 2021 North Carolina Blackberry and Raspberry Association (NCCBRA) annual meeting.

UPDATE: This event is free to NCCBRA members, but will be $20 for Non-Association Members. Event fees will be collected the morning of the event.

2021 NCCBRA  annual membership dues are $50 per farm. If you have not already renewed your membership, dues will be collected on the day of the event for any unpaid members. These monies are vital to the continued success of the association and its members. Click the following link to download the NCCBRA membership form.

Due to the fee change, if you would like to be removed from the registration, please send an email to Karen_Blaedow@ncsu.edu to indicate your preference to be removed. 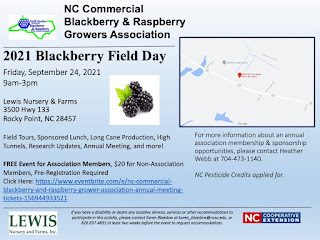 Posted by Gina Fernandez at 12:25 PM No comments:

The berry crop industry is experiencing some record heat in the Pacific Northwest. Here is a link to the industry supported newsletter with some updates.

This is a free newsletter, you can subscribe here:

Posted by Gina Fernandez at 12:58 PM No comments: 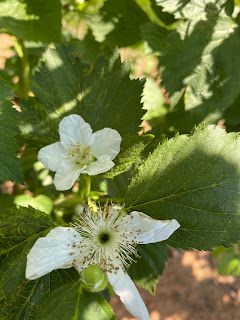 There are reports of cold damage that occured over Easter weekend and now again this week (April 22-23).

Over the weekend I visited a farm in western NC and saw that only the king (earliest to open/largest) flowers were injured, and mostly flowers on the upper portion of the canopy. The damage occurred over the Easter weekend. However, the plants were much more advanced this week, so there has been additional damage. I will be headed out that way next week to assess the situation.

Here are some older blog posts to help you understand what to look for in the flowers and on the canes.

Posted by Gina Fernandez at 11:02 AM No comments:


In January 2020, thirty-one University Extension Specialists, IR-4 field research director and growers from the southern US met in Savannah, GA to develop a Pest Management Strategic Plan (PMSP) for blackberries. This PMSP is targeted for the states of Alabama, Arkansas, Georgia, Louisiana, Mississippi, North Carolina, South Carolina, Tennessee and Virginia. These states are all members of the Southern Region Small Fruit Consortium (SRSFC). The development of this PMSP fits well into the mission of the SRSFC, which  is to develop collaborative efforts at various sites across the region between small fruit growers and grower organizations, industries and service organizations allied with and/or serving small fruit growers, agricultural extension programs and research stations working together to enhance the development of the small fruit industries in the region. The SRSFC university partners include Auburn University, University of Arkansas, University of Georgia, Louisiana State University, Mississippi State University, North Carolina State University, Clemson, University of Tennessee and Virginia Polytechnic Institute and State University.

The goal of this workshop was to develop a comprehensive list of pests (insect/mite, pathogen/nematode, weeds, and vertebrate/wildlife) and the known biological, chemical and cultural current control mechanisms for the pests. The attendees of the meeting developed lists of regulatory and research priorities in the following categories, cultural, insects/mites, weeds and diseases. The priorities are: 1) Regulatory: Expansion to include registration of the herbicide Halosulfuron-methyl (Sandia) label, 2) Research: fungicide resistance management for multiple diseases, 3) Research/Regulatory, Spotted Wing Drosophila management (additional modes of action, insecticide with shorter PHI, resistance management), 4) Research: cultural practiced to reduce labor and increase efficiency and 5) Research: bridge the gap of floricane and primocane fruiting seasons with new varieties or cultural practices. Grower input was essential in developing this PMSP and with their help and guidance, we feel this report represents the current challenges and needs of the southern blackberry industry.

The timelines developed for this PMSP took into consideration blackberry production in all of the states listed above. Collectively these states encompass a wide geographic range from the gulf coast to the mid Atlantic. Therefore production practices, crop phenology, pest occurrence and pest control will vary depending on a specific site and occur over an extended period of time.

Blackberry budbreak in our research trial

North Carolina State University in collaboration with other public berry breeders at Cornell University, University of Arkansas, University of British Columbia/BC Berry Cultivar Development Inc., and the United States Department of Agriculture (USDA-OR) have joined in a unique partnership with Pairwise, and Plant Sciences to uncover the genetic potential in Rubus. At each of the six collaborator locations (Fig 1), there are replicated trials of select Rubus cultivars, including Latham, Heritage, Chester, APF-45 (Prime-Ark ®45), and Bristol. These cultivars are  floricane-fruiting raspberry, primocane-fruiting raspberry, floricane-fruiting blackberry, primocane fruiting blackberry and floricane fruiting black raspberry respectively. These cultivars represent well known examples of raspberry, blackberry and black raspberry and display both fruiting habits  (floricane and primocane). All the collaborators are phenotyping the same set of traits over the next growing season in order to understand how these cultivars perform across a range of environments. 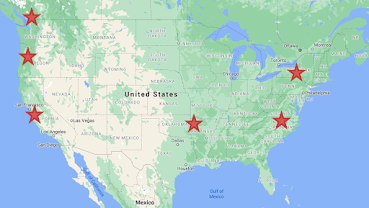 My task as a graduate student will be to analyze the data from all the sites. We will be collecting data on a large number of traits over this growing season on plant and fruit characteristics. Here is a glimpse of the data from NC.  Since we are one of the sites furthest south, one of the first traits to collect is vegetative bud break. Before the season started, I was not at all clear on what budbreak would look like. However, observing the development closely has been enlightening.

The blackberries have started to awake from their winter dormancy ahead of the raspberries. For the past few weeks we had observed  vegetative buds were  swollen and small amounts of green have started to emerge at the tips of the buds. This indicated active vegetative growth had started. Photographically recording the subtle differences in growth over time tells a better story (Fig 2). Although the buds have been swollen and showing small amounts of green, some varieties have yet to develop much beyond that point. Comparing APF-45 and Chester Thornless shows this best.

APF-45 and Chester both had buds at a similar development stage in mid February (2/17/20), but by the following week there were some small but notable differences (2/25/21). The third visit in early March (3/10/21) clearly shows the difference between these two cultivars. Chester has a few buds with slightly more vegetative growth protruding than the previous evaluation, but many buds remain swollen with minimal green tissue visible. APF-45 has continued to develop, and a majority of buds on the top third of canes have vegetation emerging that is longer than an inch or approximately 3cm in length. Determining the date of vegetative bud break using the threshold of 3cm of protruding vegetative tissue gives a better indication of the start of active growth. 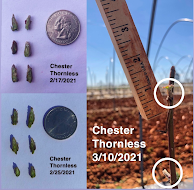 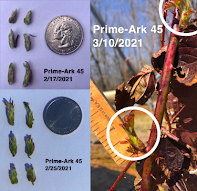 Figure 2. Development of vegetative buds for blackberry cultivars ‘Chester Thornless’ (left) and ‘Prime-Ark 45’ (right) from mid-February to early March. Vegetative buds are circled in white. Bisected buds on 2/17 and 2/25 allow us to see internal development and check for potential frost damage, which there was none. Posted by Gina Fernandez at 9:40 AM No comments: 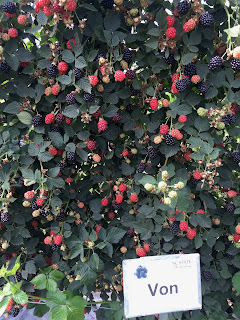 Here are the topics and links to those talks are posted when they become available. Click on the LINK and title to load the talk in a new window.

Posted by Gina Fernandez at 1:47 PM No comments: 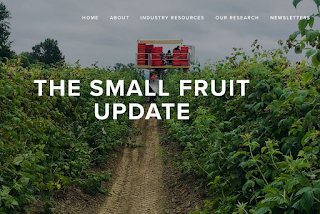 FYI, the Northwest Berry Foundation produces a great newsletter that includes industry news (and more). They report on news that is focused on their industry, however, some of the topics are of interest to all small fruit growers. I encourage you to check them out at the link below. You will need to subscribe to this free newsletter, just follow the links.

Here are some of the topics in the most recent newsletter: