Here is a re-post from last year, its almost time for you to take your leaf tissue samples

Now is the time to do some tissue sampling in blackberry. Plant tissue samples will help you determine needs and adjustments. IN NC, samples should be taken after fruit harvested from the plants. Leaves from the 3-5th node of the primocane plant should be sampled and sent to NCDA and they will make recommendations for the following season. Keep your records so you can see if there are trends in your fields. Below are the recommended levels of macro and micronutrients.

More about how to determine most recently matured leaf (MRML) is at http://www.ncagr.gov/agronomi/pdffiles/sampta.pdf

Posted by Gina Fernandez at 9:20 PM No comments: Links to this post 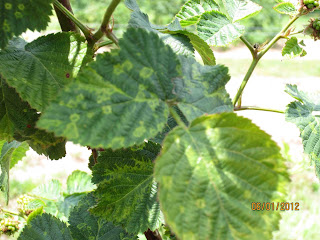 A training event updating agents within the SRSFC on viruses in caneberries was held in western North Carolina from July 29-30, 2013.  The event was graciously organized by Elena Garcia and Ioannis Tzanetakis of the University of Arkansas and Tom Monaco, SRSFC coordinator.  A total of 23 agents from the six member states along with a number of industry representatives, growers, and researchers attended the 2 day event.  The training consisted of several units of classroom instruction, farm tours, and hands-on instruction, providing participants with the most up-to-date information about how to prevent, diagnose and manage virus issues in blackberries and raspberries.
Day one of the training was held at the Mountain Horticultural Crops Research Station in Mills River, where participants were welcomed by center director Jeff Chandler and SRSFC coordinator Tom Monaco. The program began with a general overview of virus vectors and symptoms by virologist Ioannis Tzanetakis, followed by details on insect vectors discussed by entomologists Hannah Burrack,NC State University and Donn Johnson, University of Arkansas.  Terry Kirkpatrick, nematologist from University of Arkansas, described nematode vectors for caneberry viruses, and then agents were brought out to Gina Fernandez’s blackberry research plots to learn proper nematode soil sampling techniques through a hands-on team activity.

The second day of training commenced with a blackberry farm tour hosted by Marvin Owings of Henderson County Extension Office and Gina Fernandez, NC State University.  The first stop was the family-run operation of Steve Dalton on Sugar Loaf Mountain.  Mr. Dalton and his family grow 11 acres of ‘Ouachita’, ‘Natchez’, ‘Prime-Ark 45’ and ‘Navaho’ for U-pick and Driscoll’s. Mr. Dalton recently received a grant that allowed them to plant raspberries on a trial basis and install a juicing operation.   Dalton stressed the importance of buying plants from a reputable source as his main way of keeping his plantings virus-free and healthy over many growing seasons.  The second farm site was Justus Farm in Edneyville, owned by Don Justus, a fourth generation apple farmer.  Mr. Justus has five acres of blackberries for U-pick and markets to Driscoll’s, and has first-hand experience with virus issues.  He spoke of his experience in prior years with buying infected nursery stock, and the losses he incurred with having to replant his fields.  The final stop on the farm tour was at a Driscoll’s commercial farm in Edneyville.  Farm manager Andy Brownlee explained that at that particular location, approximately 30 acres of raspberries and blackberries were being grown under high tunnels with additional acreage at other sites.  All of the growers spoke of labor being an issue, but Brownlee especially stressed the importance of maintaining employee efficiency and accountability.  It was evident from speaking with all the growers that viruses are an issue that they consider very important in their caneberries, and want to be the best informed that they can be to prevent and avoid them in their fields for as long as possible.

After being treated to a genuine North Carolina barbeque lunch, the training wrapped up with a final classroom session held at the Henderson County Cooperative Extension Office.  Ioannis Tzanetakis informed participants about how to recognize viral symptoms, and updated them on the latest assays and resources available for testing viruses in caneberries.  Erich Rudyj from USDA-APHIS, and coordinator of the National Clean Plant Program, discussed how federal policies and monies work to ensure that virus-free plant stock is being propagated and readily available for growers.  Elena Garcia talked about virus-host interactions, and how the plant responds, symptomatically or otherwise, to an attack by a virus.  The afternoon ended with another team talk by Hannah Burrack and Donn Johnson focusing on integrated pest management practices that can be taken to prevent the spread of viruses through insect vectors.

Powerpoint presentations from the training will be posted on the SRSFC website at http//www.smallfruits.org/CoAgentTraining/index.htm
Posted by Gina Fernandez at 9:28 PM No comments: Links to this post