Many of us are recovering from the wrath of Hurricane Matthew. I posted some information on the Team Rubus Blog prior to the storm.  In parts of eastern NC, soils are saturated and there is still a threat of additional flooding as the rivers continue to fill with water from the tributaries. There is some information in the blog post on how to dealing with flooded berry fields. http://teamrubus.blogspot.com/2016/10/hurricane-matthew-preparation-for.html

The NC State University Extension has a new look to their portals. Check out the Blackberry and Raspberry Portal here. https://rubus.ces.ncsu.edu

The Northwest Berry Foundation has a great newsletter that focuses on production issues in the Pacific Northwest. However, they pull information from a range of sources, and many of the articles are relevant for all berry growers. It comes out on a weekly basis during the production season and less often during the off-season. Here is a link to the most current newsletter. therea are a couple of articles on labor situations on the west coast. http://www.nwberryfoundation.org/sfu.html

FALL
Plant growth and development
ü  Primocanes continue to grow but growth rate is slower
ü  Flower buds start to form in leaf axils on summer-fruiting types
ü  Carbohydrates and nutrients in canes begin to move into the roots
ü  Primocane fruiting types begin to flower in late summer/early fall and fruit matures until frost in fall
ü  Primocane leaves senesce late fall
Harvest
ü  Primocane-fruiting raspberry harvest
ü  Primocane-fruiting blackberry harvest
Pruning, trellising and tunnels
ü  Spent floricanes should be removed as soon as possible
ü  Optimal time to prune is after the coldest part of the season is over. However pruning can start in late fall if plantings are large (late winter for smaller plantings).
ü  Start trellis repairs after plants have defoliated
ü  Remove covers on three-season tunnels
Weed management
ü  Many summer weed problems can be best managed in the fall and winter using preemergent herbicides. Determine what weeds have been or could be a problem in your area. Check with your states agricultural chemical manual and local extension agent for the best-labeled chemicals to control these weeds
Insect and disease scouting
ü  Continue scouting for insects and diseases
ü  Remove damaged canes as soon as possible to lessen the impact of the pest
ü  Check the Southern Regional Bramble integrated Management Guide for recommendations http://www.smallfruits.org
Planting
ü  Growers in warmer areas (e.g. extreme southeastern NC) can plant into early December.  Preparations for winter planting should have already been made. If you have questions about winter planting please contact your local county extension agent
ü  In cooler areas, prepare list of ­cultivars for next spring’s new plantings. Find a commercial small fruit nursery list at http://www.fruit.cornell.edu/berry/nurseries/
Fertilizer
ü  Take soil tests to determine fertility needs for spring plantings.
ü  Non-nitrogenous fertilizers are best applied in the fall to established plantings.
ü  If soil is bare, plant an overwintering cover crop (e.g. rye) to build organic matter and slow soil erosion.
Marketing and miscellaneous
ü  Order containers for next season
ü  Make contacts for selling fruit next season

Make plans to attend Grower meetings! Blackberries and raspberries are part or all of these programs.

Posted by Gina Fernandez at 10:37 AM No comments: Links to this post 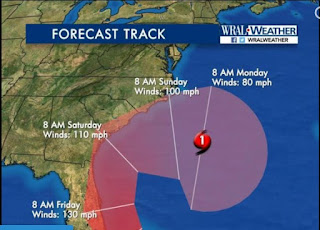 The latest forecasts have Hurricane Matthew just skidding the southeastern coast of NC. Caneberry Growers in Eastern NC (and the rest of the southeastern US) should be preparing their fields now and be prepared after the rains leave.

Here are some things that can be done before the storm:

IF YOU ARE IN AN AREA WITH HIGH PREDICTED WINDS: You should consult with your tunnel manufacturer to determine how much wind your tunnels can withstand. Removing or skinning the plastic off the tunnels  is a whole lot less costly than having the entire tunnel mangled.

IF YOU HAVE A SHIFT OR ROTATING ARM TRELLIS: Lay the trellis in the horizontal or down position and make sure it can stay in that position. Some trellises do not have the capability to lock in the horizontal position. If that is the case, it may be better in the upright position.

POTENTIAL FOR ELEVATED DISEASES: Canes if properly trellised should not lodge as a result of the wind and rain. However, there may be some physical damage to canes. Make sure you walk your fields before and after the storm. There may be a need to do some extra pruning and use of a fungicide if you can get out into the field after the storm. Phil Brannen, UGA plant pathologist recommends a spray for Cane blight, before the storm. See the SRSFC for recommended chemicals. http://www.smallfruits.org/smallfruitsregguide/Guides/2016/2016BrambleSprayGuide.pdf

After the hurricane passes there may be some soils that have flooded. Here is some information from a previous post from Cornell University. Since most of the berry crops have already been harvested, we are primarily concerned with flooded fields effects on roots.

This is an excerpt form an article is provided courtesy of Cornell University. It was written for flooding situations in the northeast in the late summer. However,  a flooded field poses similar problems for plant survival and is still an issue in the fall, as plants are not yet dormant.

How long a crop can live once it is flooded and what may be the effect on yield? Berry crops can tolerate a great deal of flooding when they are dormant, but when actively growing in summer, flooding for any length of time can be detrimental. This time of year is particularly bad because plants are preparing to make flower buds for next year, and stress can compromise this process. If plant roots were under water for more than 48 hours, expect next year’s crop to be compromised as well.

Plants previously flooded may develop an off-green or yellowish color.  These plants are suffering from a complex of nutrient deficiencies, nitrogen, phosphorus, potassium and perhaps others, even though the soil contains adequate amounts. But the main deficient element is oxygen. Plant roots need oxygen to take up nutrients and water to utilize the photosynthate from the tops and to grow. With the heavy rains we have had, soils are saturated; that is, nearly all of the pore space is filled with water, leaving little room for air. Ideally, for good root growth 50 percent of the pore space should be filled with air. As soils drain, air is drawn into the soil, but when it rains, the water forces the air out of the pores. As is obvious to all, what is needed now is several rain-free days so the soils can drain and draw in air to stimulate root growth and help disperse toxic compounds that accumulate when plants lack oxygen.  Once the plant roots get adequate oxygen they will begin to grow and take up the nutrients present in the soil. Anything that can be done to remove surface water will be helpful.

Many plant diseases will be much worse following flooding rains (e.g. Phytophthora and Botrytis), so closely monitor crops and manage these diseases. Phytophthora spores are spread under flooded conditions, so chemical treatment may be warranted in susceptible crops (red raspberries and blackberries).

(Thanks to Steve Rieners and Marvin Pritts at Cornell University for sharing this with us.)

Posted by Gina Fernandez at 1:56 PM No comments: Links to this post