Buds are tight but not for long!

Blackberry flowers and fruit essentially have the same stages as strawberry flower development. Tight bud, popcorn, open blossom, and fruit. All of the images above are buds, Apache and Von would be considered tight buds. A close up of Ouachita show that one of  flower buds is at the "popcorn" stage, where the sepals are spread out and the petals below are evident and clearly visible. Apache below, has all tight buds as did Von (no photo).

UPDATE 5/8/2013. Several reports of this are coming in from the field since this was originally posted. Make sure you scout your fields now and follow the recommendations below.

This image was taken yesterday in our research plots. It is typical of early season symptoms of Orange Rust (Gymnoconia nitens) in blackberry. The plants were weak and spindly with yellow leaves, some leaves will have an orange spots at the edges of the leaves. This was a numbered blackberry selection in the breeding program.  Two plants in the plot were symptomatic, two others did not have any symptoms. The two infected plants were dug up, with as many roots as was possible and disposed of far from the caneberry fields.


From the SRSFC IPM guide:

Orange rust – Hosts affected: Navaho blackberry and black raspberry are very susceptible. Multiple spindly shoots that are light green in color, at first developing orange pustules on undersides of leaves only, indicate systemic infection of roots. Normal canes with orange spores indicate first-time infection. Disease control: Inspect planting thoroughly when new canes are 12-18 inches. Remove infected canes, recognized by weak growth and the presence of orange pustules. The varieties Cherokee, Cheyenne, Comanche, Choctaw (erect, thornless), Arapaho (erect, thornless), and Shawnee are considered resistant. The possibility of new races exists, as orange rust has been observed in all varieties. The varieties Darrow, Humble, and Navaho and black raspberries are susceptible. Wild blackberries should be eradicated within 0.25 mile of planting. Preventive fungicide applications are effective; however, once a plant shows symptoms, it has to be removed and destroyed.

Ohio State University has a publication describing this disease. Figure 3 is very similar to the one in this blog post. 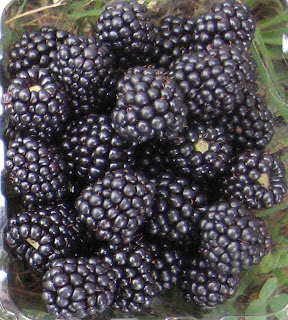 Bad news. Although we tried hard to get plants to nurseries and licenses signed well before planting season spring 2013, it did not happen. We are still working on the paperwork and are hopeful that there will be plants for sale for fall 2013 planting.

Good news. In most parts of the south, fall planting can be done and can be a better time to plant. When plants are set in the fall (late September/early October), they are able to establish a strong root system and not be challenged with the hot summer growing conditions. This healthy root system will enable the plant to be more vigorous in the following season.
Posted by Gina Fernandez at 1:17 PM No comments: Links to this post

Orange spots on canes? It could be Orange Cane Blotch AKA Orange Felt

Orange Felt or Orange Cane Blotch (Cephaleuros virescens) is a problem that occurs on blackberry canes in the warmer regions of NC. The "disease" is actually a parasitic algae.  It is usually first seen on the floricanes in the spring as yellow/orange disks. Plants with higher infection rates can have the disk shapes join into larger regions on the canes. In mid summer they can become velvety in appearance. Severe infections should be controlled as they will significantly weaken the plants.

I first saw this about 10 years ago in southeastern NC, before the blackberry industry expanded through the state. The site was in the extreme southeastern part of the state. Without the benefit of a digital image, I had assumed it was the more common disease orange rust. However, when I saw the the plants, the symptoms were not what I was expecting. We finally determined it was Orange Cane Blotch.

This disease is now in many counties in NC. I see it most often in plantings with high plant density, lots of vegetation in alleys (weeds or cover crops) and when beds are not raised or do not have plastic. A simple way to tell the difference between orange cane blotch and orange rust is to lightly rub the infection site. When the orange felt colonies are rubbed, they cause a stain, but a light rubbing of an orange felt colony does not cause a stain on your fingers.

Dr. Phil Brannen prepared a circular on this disease, including suggestions for biological and chemical controls. Here is a link:
http://www.caes.uga.edu/Publications/pubDetail.cfm?pk_id=7381&pg=al&ak=O

Posted by Gina Fernandez at 4:30 PM No comments: Links to this post

Pruning and planting Blackberries at Center for Environmental Farming Systems

Opps, I forgot to post this....way back in March, I helped put on a workshop at the Center for Sustainable Farming Systems Small Farm Unit. We had a short presentation on growing about growing blackberries inside and then we headed out to the Small Farm Unit to do some pruning and planting.

First we pruned an old planting of blackberries. I helped establish this planting in 2008 and it has been maintained using organic practices. It was scheduled to be removed because it had succomb to various problems including crown borers and viruses. However, before they were pulled out, we used them to show how to prune. 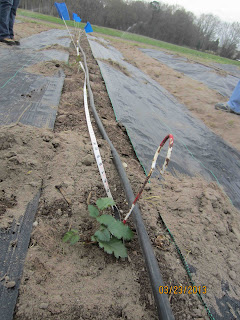 Then we set out plants for the new study. We will plant 7 blackberry varieties in this demonstration plot. This site has been used for workshops on organic production of blackberries for over 3 years and will be used for various other education opportunities for interns at CEFS.
Posted by Gina Fernandez at 4:32 PM No comments: Links to this post

Here is a link to an article discussing the expansion of caneberry growth primarily in the western part of NC.


US: Expansion of berry cultivation in North Carolina
Posted by Gina Fernandez at 9:19 AM No comments: Links to this post

Monitoring of fungicide resistance service for blackberry and strawberry farms

Clemson University is offering a service to determine resistance to a series of fungicides on your farm. See article below.

First results of 2013 monitoring for fungicide resistance in the gray mold pathogen Botrytis cinerea
Dolores Fernández-Ortuño and Guido Schnabel, Clemson University
Gray mold caused by the fungus Botrytis cinerea is probably the most economically important disease of strawberry worldwide. Infection of strawberry flowers is caused by spores and results in fruit decay. Fruit infections begin as small, firm, light brown lesions that enlarge quickly and fruit become covered with a gray fuzzy mass of spores followed by a soft rot. Gray mold disease can easily spread during periods of rainy and cool weather, heavy dews, or high relative humidity.
Chemical control of gray mold is essential to prevent fruit decay before and after harvest but resistance in B. cinerea to key fungicides is emerging. Therefore we started an extension program at Clemson University, which provides farm-specific fungicide resistance profiles. In our laboratory, fungicide sensitivity assays are performed that allow the distinction of sensitive from resistant isolates. During the 2011/2012 growing season we collected gray mold from commercial fields in Arkansas, Florida, Georgia, Kansas, Maryland, North Carolina, South Carolina, and Virginia. From each field we collected spores from ten berries (called a sample) and confirmed that the gray mold fungus was resistant to multiple chemical classes. The majority of the samples analyzed contained fungus that was resistant to Topsin M and Pristine. Half of the samples had a significant portion of fungus that was resistant to Scala and Elevate fungicides. Resistance to Rovral and Switch was rare (Figure 1).
This season we are providing the same service to strawberry growers and so far, we received samples from Georgia, Maryland, North Carolina, South Carolina, and Virginia. Fungicide resistance is still present and virtually all samples are resistant to Topsin M. In contrast to last year, however, resistance to Pristine has not been found that often. Only every 5th sample on average is resistant to Pristine. Rovral and Switch remain to be great options against gray mold disease but remember that Rovral is restricted to one application prior to bloom (Figure 1).
If you are are a strawberry or blackberry grower and you are interested in getting your farm-specific resistance profile to identify ineffective fungicides, send us around 40 dead strawberry (or blackberry) flowers or collect spores from newly infected, decaying fruit with a cotton swab. We need about 10 to 15 of those swabs (each from a different fruit and each fruit from plants far enough apart to represent an acre or so). Make sure that you only collect the fungus spores, do not touch the fruit (Figure 2). Mail the flowers or the swabs to Guido Schnabel, Clemson University, 114 Long Hall, Clemson, SC 29634 and tell us the origin of the sample, your name, and e-mail so that we can send you the report electronically. Upon receipt, we need about 3 (for cotton swabs) to 5 (for flowers) working days to get a report to you outlining farm specific gray mold management recommendations. 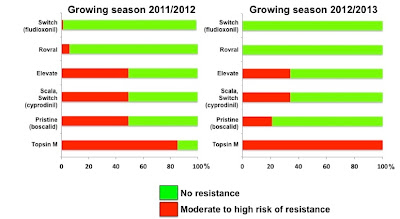 Figure 1. Percent of samples with resistance to fungicide (red) collected from 8 states. 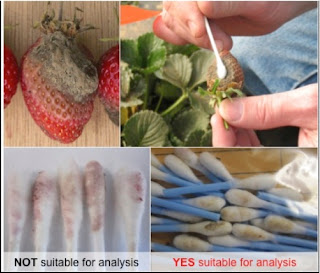 Figure 2. How to collect spores from strawberries affected with gray mold using cotton swabs.
Posted by Gina Fernandez at 5:17 PM No comments: Links to this post