It's time to scout for orange rust 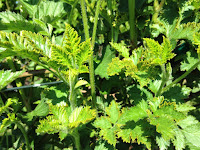 Spring has arrived here in the mountains of Western North Carolina and with the increasing temperatures blackberry primocanes have started to emerge across Henderson county. This is a great time to start scouting for the important blackberry disease, orange rust. Glancing across an orchard of green lush new growth, spindly primocanes with misshapen yellowish leaves easily captures one’s attention. Upon closer investigation, the wavy leaves will have orange spores forming along the lower leaf margins, which is characteristic of orange rust. So far, this year, Navaho has been the most widely affected variety, with a few Natchez plants also infected. 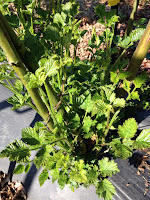 Orange rust is caused by two fungal organisms: Gymnoconia nitens and Arthuriomyces peckianus. Once a plant shows symptoms the rust is systemic meaning it will remain in the root system throughout the life of the plant and it’s floricanes will stop producing flowers. This is why it is recommended a plant showing symptoms be removed and destroyed. Confirm that the rust is orange rust and not the less destructive cane and leaf rust, caused by the fungus Kuehneola uredines. Microscopic inspection of the spores is the most effective way to distinguish between these two diseases. Have a county extension agent assist with diagnosis. More information on orange rust management can be found at www.smallfruits.org.

Karen Blaedow is new to Henderson Co, but is not new to NC Cooperative Extension. She was an Extension Agent in Wayne County a few years ago. Karen has an M.S.  in Plant Science from Clemson University with an emphasis in Plant Pathology.  She studied under Guido Schnabel (so she knows a few things about diseases!). She has a B.A. in Biology from College of Charleston,  and is originally from North Augusta, South Carolina. Karen has great skills and has spearheaded a nice study in blackberries that she will share more about in a future blog. Her contact information is below. 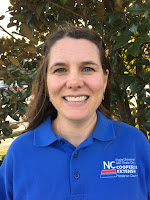 Posted by Gina Fernandez at 3:28 PM No comments: Links to this post

The Spring 2017 issue of the Small Fruit News is online, http://www.smallfruits.org/Newsletter/Vol17-Issue2.pdf 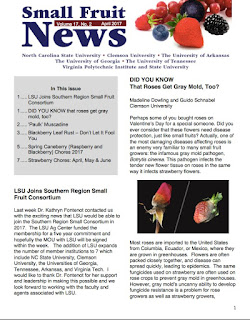 Posted by Gina Fernandez at 4:16 PM No comments: Links to this post