USUALLY, this time of year it is extremely hot (80/90's during the day, 70/80's at night) in North Carolina. It is also peak blackberry harvest. Both the blackberry fruit and people who harvest the fruit can become heat stressed with the high temperatures. Fruit can become soft, discolored (red and white drupes) and have a reduced shelf life and workers can suffer from heat exhaustion. So we asked Jeff Crotts, a blackberry grower in Vale, NC if we could work with him along with Lincoln Co. Cooperative Extension to see if night harvested fruit had better post harvest quality. We also thought that the night temperatures would be more conducive to worker health. 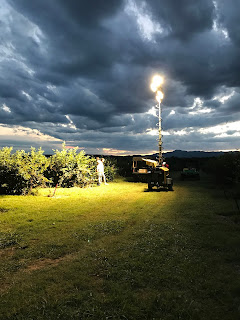 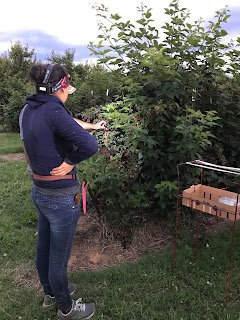 Earlier this week set up a large portable light in the blackberry field. Workers were also given head lamps.


We harvested blackberries every 3 hours for 24 hours. We took fruit temperatures from fruit harvested on both east facing and west facing canopy. We then took the flats to the cooler. We started at Noon on Monday and finished up at 9 am on Tuesday. 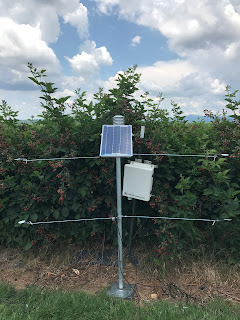 Temperatures were monitored throughout the experiment and we (actually Tom Dyson and Andrew Suggs Lincoln Co. Extension) also looked at leaf and fruit wetness through the night and several other nights. The station was provided courtesy of NC State Climate Office.

Temperatures were usually pleasant, so workers and fruit were not as stressed as they might have been under a normal 90F day. However, there was about a 20 degree temperature difference from day to night. So we should still have some good data on fruit post harvest evaluations. There were also differences on fruit harvetsted from east and west facing sides of the trellis. 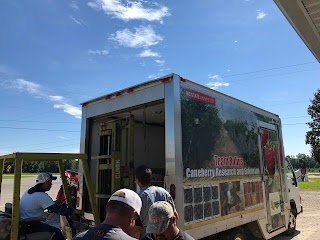 All the fruit was then taken to the Plants for Human Health Institute where Penny Perkins-Veazsie will do post harvest evaluations on the fruit for the next couple of weeks. 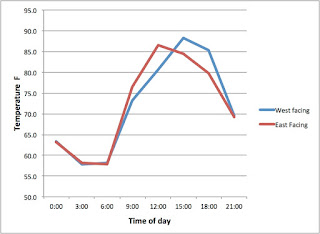 There were differences in fruit temperatures throughout the 24 hours. The fruit harvested from the east facing side of the canopy got hot earlier in the day than the western facing fruit. We are still looking at the rest of data and will be sharing more as we get it analyzed.

Thanks to Rocco Schiavone, Guillermo Chacon-Jimenez, Tom Dyson, Andrew Suggs for all your help collecting data. Thanks to Jeff Crotts and crew members at Knob Creek Orchards for access to your field and all your help.

Posted by Gina Fernandez at 12:07 PM No comments: Links to this post