In early January, at the SE Vegetable and Fruit Expo in Savannah, GA, we set up a microscope and a magnifying glass (the kind you get in a craft store) to look at bud damage in blackberries. Most of the buds that I sampled looked good. http://teamrubus.blogspot.com/2014/01/buds-look-good.html

On Feb 6, 2014 we be looking at more samples at the annual meeting of the North Carolina Commercial Blackberry and Raspberry Association, in Shleby, NC. (Contact Daniel_Shire@ncsu.edu for meeting information). We will be looking at  samples collected  from our research blackberry and raspberry fields.

You are welcome to bring in some samples from your fields. We may not get to all of the samples, but we will train you to look at your own samples, so you can sample your own fields on a regular basis.

If you want to bring in some samples or prepare samples for evaluation at home, here is the protocol (courtesy of Michelle Warmund, University of Missouri):


At the meeting we will cut canes and check for injury symptoms. Dead cane sections and buds will have oxidized and turned brown after storage for 4-5 days in the zippable gallon size plastic bag. The sections from the lower and mid cane are needed to assess potential damage primarily to the canes. We will look at bud and cane damage on the laterals.

Here are some examples of bud and cane damage in West Virginia at the USDA Appalachian Fruit Research Station in Kearneysville, WV. The photos taken by Dr. Fumi Takeda.

Posted by Gina Fernandez at 8:18 PM No comments: Links to this post

Here are a couple of images that show buds that we looked at yesterday. As I mentioned before, buds are tight and at the stage when they should be most dormant.  We did not see any damage to all but one of the buds we evaluated (20+ buds).

The first image is of a healthy bud, this is typical of the many buds we sliced longitudinally.

This image was from Navaho, but all other cultivars including those from the Pacific Northwest looked healthy.

This is from a small weak lateral, cut from the tip of a plant:

Posted by Gina Fernandez at 11:22 AM No comments: Links to this post

Growers and Agents: I will be at the 2014 Fruit and Vegetable Conference in Savannah, GA later this week. Debby Wechsler, Executive Secretary of the North American Raspberry and Blackberry Association is sharing her table space outside of the Blackberry and Raspberry Conference on Thursday afternoon, January 9, 2014.  I will be looking at blackberry bud samples that may be damaged by the cold temperatures over the next couple of days.

Please bring in your samples. I will have a microscope and some sharp scalpels to slice open the buds.

Protocol:
- take samples from laterals that occur at the top, middle and base of the canes. Bring in several buds from each section.
-place samples in bags, make sure that the samples are labeled with top/middle/base of cane and variety.
-below is an example of a bud, this was taken last spring so the buds are further along than what you may see in your field.
-if you are doing it on your own, longitudinal slices are better. I suggest you go out before the temperatures drop and after as well, to see if there are any differences. 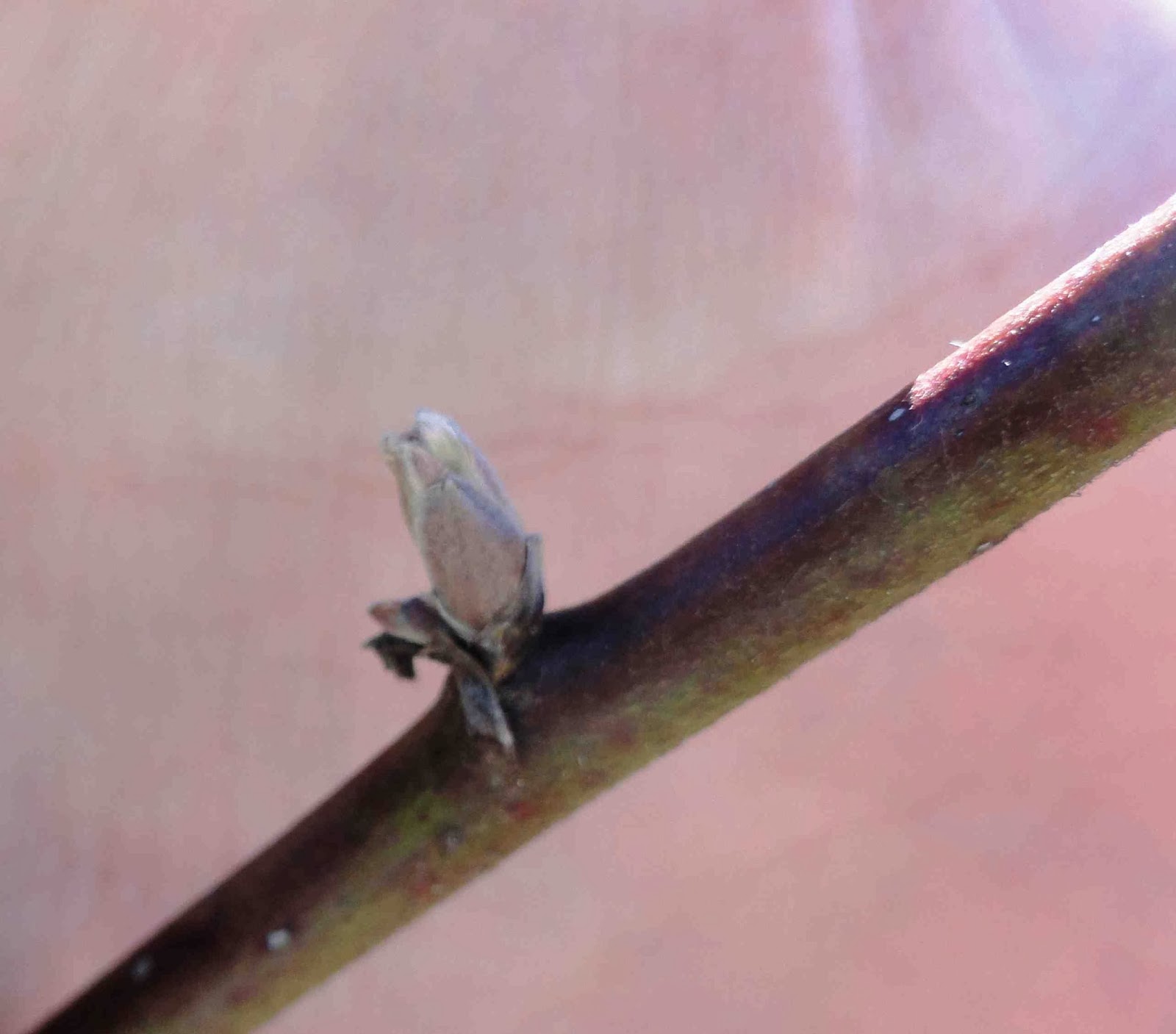 Buds are tight and still developing.
Chilling has not been met for most cultivars (500 hrs in Salisbury).
Low temperatures predicted in the next 10 days are nearing the level that we have some concern about damage.


Longer version:
Bud Development. We are heading into the coldest part of the year and the blackberry and raspberry buds are tight and are at the hardiest stage of their lifecycle. Research done by Takeda and others in 2003 (http://www.ars.usda.gov/SP2UserFiles/Place/19310000/FTakeda/2003JASHS-blackberrypaper.pdf) followed stages of bud development of both thorny and thornless blackberry cultivars. In general in January buds are at stages 4-6. At this stage, the flowers are still developing, and the most terminal flower buds are furthest along.  See the table 1 below for a detailed description of the stages. So, I dont think that the buds have fully developed. Will there still be some damage? Possibly. I will be monitoring the situation. The good news is that we know that there are secondary buds that can produce nearly a full crop.

Chilling. We have accumulated 508 hours of chilling as of today at the Piedmont Research Station in Salisbury, NC. This is based on the model found at http://nc-climate.ncsu.edu/cronos/blackberry. The model we use accumulates 1 chill unit when temperature is between 0 and 7° C. The plants should accumulate several more units this week, despite the predicted cold weather. Most of the varieties we grow are higher chilling and have not yet met their standard chilling units, which are estimated to be between 700 and 1100 hours. http://teamrubus.blogspot.com/2012/02/chillin-in-nc-part-2.html

Low temperature damage? Michelle Warmund did some research several years ago and found that with eastern types of blackberries, buds at this time of year have reached their maximum hardiness and are killed at −9 °F.  While the types grown in the western part of the country are often damaged when temperatures reach 12 °F. However, we have observed damage to plants at the Upper Mountain Research Station in Laurel Springs to eastern types when temperatures dipped into the single digits. However, I think most of the damage we saw occurred later in the spring when the flowers were more fully developed.

Monitor your crop. Monitor the temperatures.

Walk through your fields now and look at buds. Are they tight? Slice a couple open longitudinally and see if they are white and green inside, this is a healthy bud. Black is not good.

Use row covers? There has been success in the midwest using row covers over the RCA trellis. The trellis is in the lowered position allows for "easier" positioning of the row covers over the trellis. I am not sure how feasible this would be with the trellis system we use in NC. However, if you have a piece, it may be worth pulling it over the entire canopy, sealing up sides and ends. What you want to do is to hold in some heat that is captured during the day. Here is a picture of one of our RCA  plots with row covers. 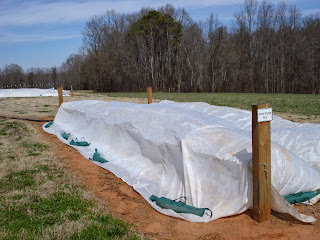 Posted by Gina Fernandez at 2:37 PM No comments: Links to this post