It is March and if you live in North Carolina you know it is March Madness season. This year we have the usual NC basketball teams (who shall not be named) making the Sweet 16/Elite8/Final 4. However, there is some "maddening" things happening in the berry fields as well.  Warm temperatures in February and March stimulated bud break, and were followed by some very cold temperatures (in the teens) March 22-24.

Blackberries throughout the Carolinas were in various stages of bud break.  In research plots, the most advanced cultivars (Ouachita and some numbered selections) were about 1/4" to 1/2" elongated.  King flowers were killed in most of the more elongated buds.

A grower field tour last week in the Lincolonton NC area,  revealed that earlier flowering cultivars like Ouachita and Kiowa had king flowers and some of the secondary flowers killed. There was less damage to Navaho and Von both later flowering/fruiting cultivars. There was no green/brown cane discoloration that would indicate cane vascular damage, at least none that was evident at this point.

We will know the extent of damage as the buds continue to elongate over the next couple of weeks.  Although the temperatures were quite low, damage does not appear to be as bad as other years.


Posted by Gina Fernandez at 10:08 PM No comments: Links to this post


Yesterday the NC Cooperative Extension County offices in Guilford and Rockingham Counties held a joint blueberry and blackberry pruning demonstration in Guilford County. The pruning demo had been planned in the fall of 2016, with the thought that the first few days of March would be ideal time to prune. That is, plants are transitioning from winter dormancy to spring but buds are not yet swelling or opening. But February 2017 was much warmer than usual, so bud break had already occured on blackberry and blueberry. This is NOT a good time to prune because as you prune, you pull those removed canes through the canopy and you may accidently rub off buds on canes that remain.  The grower was wise and had already pruned all but 3 plants earlier this winter (see picuture above). 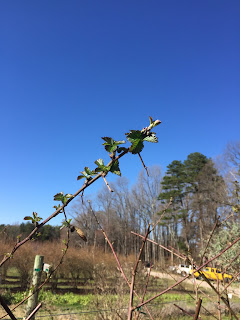 A close up of these canes shows that the buds that are furthest out on the canes are more advanced on some canes (foreground), while other canes had very little bud break (background). The open buds could easily be broken or rubbed off during pruning.

With the predicted lows into the 20's this weekend, there is a potential for damage to flowers in the blackberry buds.  Research has shown that unlike strawberry or blueberry ALL stages of flowers in blackberry are killed when the plant temperature is at 27 F. 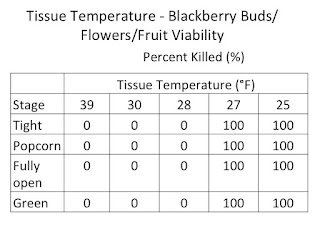 Growers should monitor their fields and record the low temperatures. Check buds the day after the freeze and look to see if there is any damage in the center of the buds. See images below.

We have posted lots of information on this site before. Here is a quick link to some of that information.
http://teamrubus.blogspot.com/search?q=freeze

Posted by Gina Fernandez at 9:22 AM No comments: Links to this post