Over the last week there have been cool temperatures at night that have damaged the blackberry crop. The crop in some areas was 10 days to 2 weeks earlier than usual. This year we saw damage to the primocanes, something that we have not seen before. Thanks to the many growers I have talked to over the past couple of days for sending in the pictures below.  My impression is that the site and not cultivar has more to do with damage. Higher sites on the same farm incurred less damage. Also healthier plants sustained less damage.

Flower bud damage
The first image below are from a field visit a few years ago. The first image illustrates how a fruiting lateral looks fine on the outside, however once you slice open that same shoot, you can see that many of the centers (technically receptacles) of the flower buds are black. If the centers of the buds are black, they will not develop into fruit. If they are green, the fruit will develop normally. 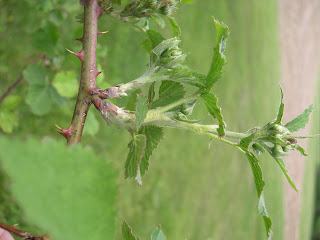 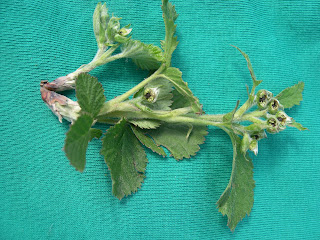 On most farms, the crop this year was further along and the damage is easier to spot, no need to cut open the buds. The blackened centers are the receptacles. Culitvars from top to bottom are: Prime-Ark 45, Natchez, Osage and Freedom.

Damage to primocanes
This year we saw damage to the newly emerged primocanes.  We think that the winds that came through over the last week made the plants more vulnerable to the cold temperatures. The damaged tissue will die. However, there are still buds on the lower canes and they will emerge and start growing. The response of the plant will be similar to tipping.

What to do this year?
What to think about for the future?
Thanks to the many growers and to Karen Blaedow, NCCES Henderson County agent who shared their images with me.